The Rias Ark Museum of Art was established by Miyagi Prefecture as a core facility of the “Project for Creating Regional Culture” that the Kesennuma and Motoyoshi areas applied to be a hosting community as part of the “Project for Regional De-velopment of Wider Areas,” a program for regional revitalization launched by Miyagi Prefecture for the purpose of well-balanced development of all areas in the prefecture. The museum is managed by the Kesennuma and Motoyoshi Wide Area Administrative Association as a prefectural facility consisting of one city and five towns at the time of its establishment. Then on May 31st, 2004, the association was granted the con-cession of the entire property of the museum from the Pre-fecture. After the consolidation of the municipalities, the association now consists of one city and one town, namely Kesennuma city and Minamisanriku town.
The “Rias Ark Museum of Art,” as a core facility of the project, is a life-long learn-ing facility, which strives to create regional culture rich in unique individuality with the perspectives of art, through providing people in the community “opportunities to expose themselves to high quality art and culture” and “a venue for regional residents to participate in and introduce their creative activities.” Recognizing Tohoku and Hokkaido as one area, the museum offers permanent as well as tem-porary exhibitions under the basic policy of “continuing to study and re-search art and culture including fine arts.
It is located on the hilly area at 2.5 km south-west from the Kesennuma city cen-ter, overlooking the Kesennuma bay. Its architectural design was a work of the Ishiyama Osamu Lab, Department of Architecture, Faculty of Science and Engi-neering, Waseda University. The area is 4,601.22 ㎡, three-stories tall, and has a roof top garden. The museum building won a prize from Architectural Institute of Japan in 1995.

This building has versatile functions, including facilities such as the Ark Gallery, Exhibition Room, Community Exhibition, Workshop, High Definition Gallery, etc. The Ark Gallery permanently exhibits the “Ark Diary (Hakobune Nikki),” which re-views indigenous cultural resources in the region and unveiled historical and eth-nic resources with “food” as its core figure and introduces those artists who have some connections to this museum through the “Museum Collection,” while our Ex-hibition Room documents the records and history of past disasters with the title of “Documentary of the East Japan Earthquake and Tsunami and History of Tsunami Disaster.” The Community Exhibition space is to be used for museum temporary exhibitions, rotating exhibitions as well as other exhibitions to present the crea-tive activities of residents. Our Workshop supports creative activities of residents and the High Definition Gallery offers a venue for the museum or other users to accommodate a wide range of events, such as lectures, film screenings, etc. The above-mentioned endeavors were highly valued and the museum was presented with “the Award for Regional Creation (Prime Minister’s Award) 2014” in recogni-tion of “pioneering new ground as a regional archive.”

Name and Symbol Mark of the Museum 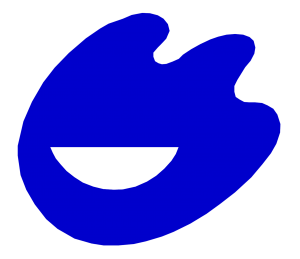 The word “Rias” comes from a geographical term “rias coastline,” which applies to the geographical features of the Sanriku coastline and acknowledges the location of the museum as standing on this particular coastline. The word “Ark” comes from Noah’s Ark in the Great Flood in the Old Testament and refers to the image of that “ark.” Those words combined symbolize the mission of this museum. Amidst the changing stream of time that resembles the rough tides of life’s events, the museum continues with its investigative research and its collection of cultural resources of our community. Recognizing that the cultural “memories of the region are a precious and irreplaceable asset,” the museum needs to preserve these and pass them down to future generations.

The museum’s symbol has blue as its primary color, symbolizing the abundant ocean off the Sanriku coast. The stylized ark (shown as the white part inside) symbolizes a vessel that transcends rough tides (shown as the waves on the right). This wavy part symbolizes not only waves but also the jagged formation of the rias coastline of the Sanriku area. The overall shape also stands for a palette, which is a symbol of art.